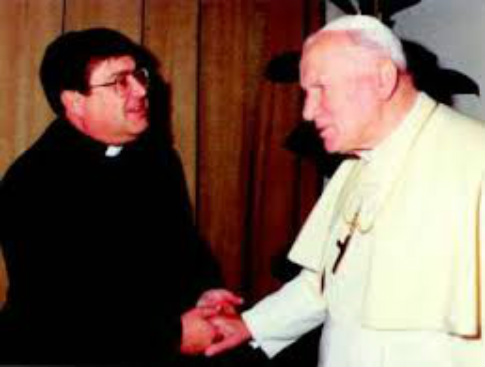 José Manuel Pereda Crespo, was born on December 2, 1943, in the city of Tampico, Tamaulipas. He follows elementary studies at the Institute Patria in Mexico City. He entered the Faculty of Medicine of the UNAM, where he actively participates in the political movement that was then lived in the university. In 1968 he was deprived of his freedom, remaining six months in prison and there he began his search for the Will of God.

On January 25, 1971, while still a layman, he heads the foundation of the Crusaders of Christ the King. Performs philosophical studies at the University of La Salle. Later, he enrolled in the Higher Institute of Theological Studies San Ildefonso, in Toledo, Spain. On September 20, 1984, he received the Presbyteral Ordination in the distinguished Basilica of Our Lady of Guadalupe, in Mexico City.

From then on, he serves the members of society seeking the Will of God under the premise "Love the Church." However, as he himself reveals, in the year of 1997, in a dinner with the then Pope John Paul II recognizes his superb in the answer to a question of the Holy Father.

In 1999, he made the month of Spiritual Exercises of Saint Ignatius de Loyola. Thereafter, he began a process of purification of intention and constant prayer. At the General Chapter of 2002, he exhorted the members of the Society to ask for the grace to live in an "attitude of confession", intensely preaching the Divine Mercy and proposing the change of the name of the Society to Servants of Jesus.

​On July 24, 2003, he founded the Servants of Jesus, in compliance with the Decree of the Archbishop Primate of Mexico on the same date.
In 2004 the discernment of the Divine Will continues, culminating in the Extraordinary General Chapter celebrated during the month of January 2006, where he renounces the position of Superior General of the Servants of Jesus to dedicate himself fully to prayer and to Spiritual Exercises.
On March 23, 2009, with the consent of Emmi. Mr. Cardinal Juan Sandoval Íñiguez, Archbishop of Guadalajara, Fr. Francisco Javier Almanza Terrazas, S. de J., current Superior General of the Servants of Jesus, erected the House of Prayer of the Most Holy Trinity, seat of the contemplative nucleus of the Servants of Jesus, being Superior of the same Fr. José Manuel Pereda Crespo, S. de J. Father José Manuel Pereda Crespo, S. de J., is also the founder of the Association of faithful Virgo Fidelis.
Powered by